My sons and I had a chance to attend a wonderful evening play written by my wife’s sister-in-law’s sister, Sharmila.

Location: the north end of the black-painted steel bridge near the old Bukit Timah Railway station:

The land belonged to the Keretapi Tanah Melayu (KTM) and was returned to Singapore following an agreement between the Malaysian and Singapore governments in 2010. The last train to leave the Tanjong Pagar station was on 30 June 2011.

Back to the play.

Sharmila, an accomplished writer and theatrist, wrote a play that recounted stories of the Railway that her grandfather who was part of the tapestry that was the Railway. 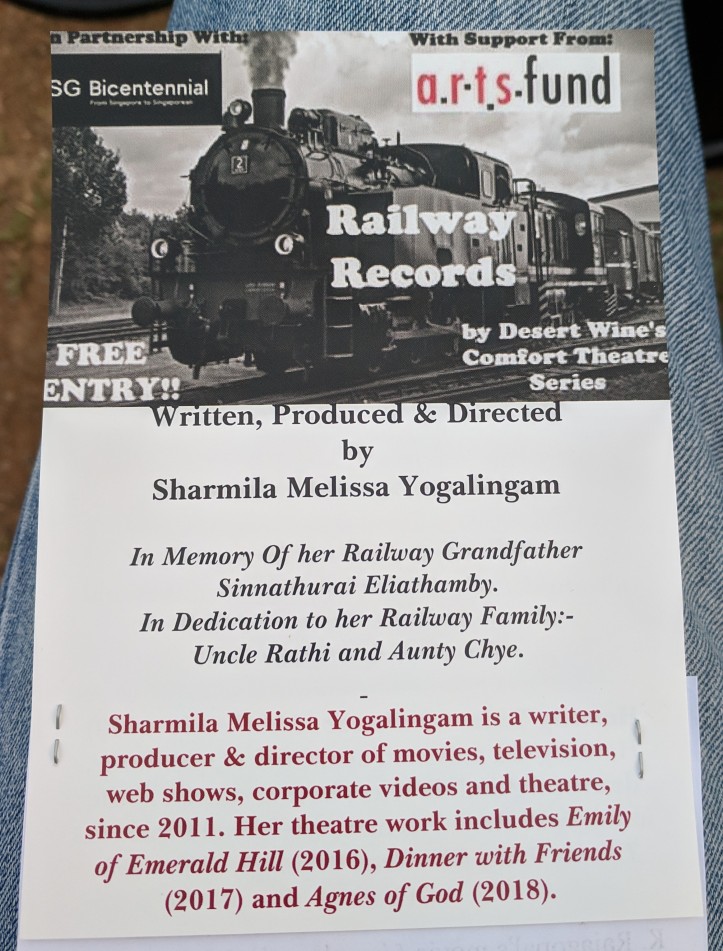 The play was about how the railway was integral to many aspects of Singapore’s history and it was a celebration as well as a re-telling of the trials and tribulations of people in various times in the long history of the railway.

The entire play was narrated by Sandeep Singh, who set the stage initially from about the late 1890s when a railway was designed and built by the local British administration and called the Singapore Government Railway. As his narration faded, each of the actors came on to recount their stories.

The first was Kris Marvaricho, who spoke of “Colonial Craving” a story from 1903, on how he read about this fabulous place called Malaya and Singapura where you could, by hardwork, make a fortune. He was was a poor neighbourhood in Madras (now Chennai) and could not afford the cost of the passage via ship to Malaya/Singapura. He was advised to act like a man servant for some of the wealthy ship travelers so that he could stow-away. He successfully did that and when he landed in Singapura, he met with an uncle who had done the same thing as him years earlier and was able to find some job to make his fortune. 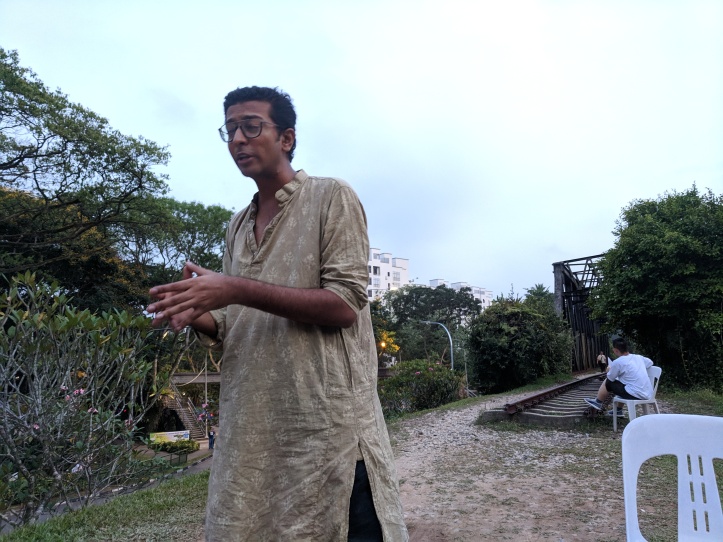 Next was Vishal Kattri, who recounted his 1932 story about “Tata” (grandfather in Tamil). He was a widower with 6 children and how he struggled to raise the children as a single parent. His wife died while delivering their last child, who also died at birth. He found ways to manage his grief and, his family to even being able to hire someone who was looking for a room and work to become the amah for his children. He managed to get his eldest child married off and was awaiting the arrival of his grandchild who he is expecting to meet at the Bt Timah Railway station any moment now. 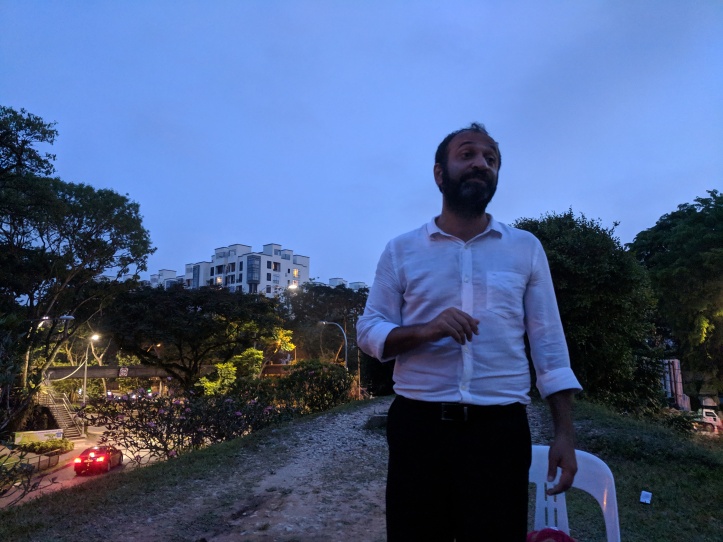 As time marched on, in 1961, the then Prime Minister of Malaya, Tengku Abdul Rahman, was exploring having Singapore be part of a larger Federation (along with Sabah, Sawarak and possibly Brunei).

At around that time, the story continued with Parimala Krishnasamy who spoke about “Tech and Tea” a story from 1961. She had arrived into Singapore from Peninsula Malaya because she did not want to work as a helper at her father’s coffee shop. Her mother wanted her to work in an office with windows, fans and luxuries like that. As she had many friends in Singapore already, she was able to get lots of leads on jobs but most of them were either being a Tea Lady or a Girl Friday. Tea Lady? Really? If she was going to serve tea/coffee/cakes etc, she might as well do that at her father’s shop. So, she settled to being a Girl Friday (yes, they work all days not only Fridays!). Things were going along well enough until she and her colleagues were introduced to by their boss to a machine from a company called “IBM”. This was a typewiter unlike any other she had known. Some called it a “Golf Ball” typewriter. She was bothered by this change. What’s wrong with her pen and paper? Why must she now use this shiny new thing?

Parimala Krishnasamy on trials of tech and tea

Sandeep came back on to fast forward the timeline to 1990. The world was beating a path to Singapore to set up regional and global headquarters here.

Dorothy Leong spoke about “Fate” where she was to meet with some business executives arriving from KL via train and that she was delayed. She had to rush out of her home to arrive at the train station only to find out that the train was late as well, and had to inform the office. All she had was her pager but no phone. She had left her phone (all of $3000 worth and a big monster to carry) at home safely. And in her hurry, she forgot to bring along her wallet and now was running all over to find a means to make the 10-cent phone call using the public phone. She was afraid that failing to do this little bit of work would find her being fired since, European-owned businesses seem to just hire and fire at will. 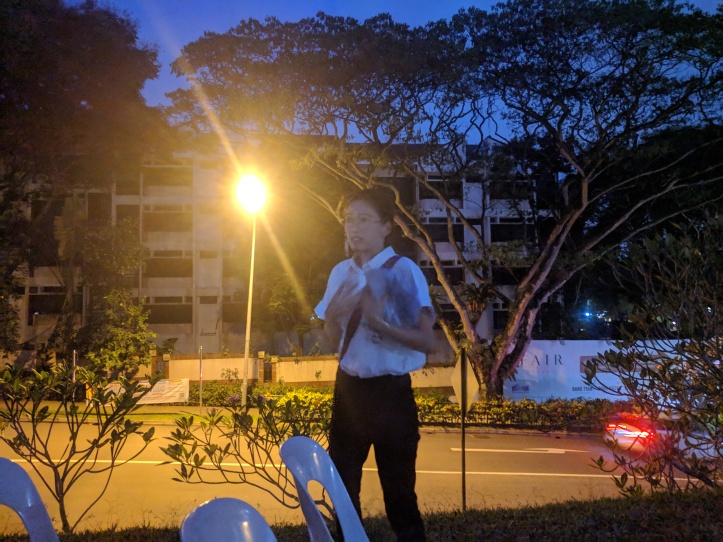 Dorothy Leong on the fear of being fired

Sandeep came back to wrap up the play. As he spoke, the other members of the cast came on and told of their triumphs. Dorothy was not fired and she did well. Parimala learned to work with tech. Vishal was doubly blessed with twins by his oldest daughter and Kris was happy to have a new life in Singapore.

It was a play that lasted about 40 minutes. But we thoroughly enjoyed it. The setting was fantastic. About 10 meters above the junction of Dunearn Road and Rifle Range Road with the setting sky behind the “stage” and with the backdrop of the black railway bridge, it was a delightful evening.

So thank you, Sharmila for the wonderful evening. Your grandfather, Sinnathurai Eliathamby is, is I am very sure, mighty proud of you.

I must also acknowledge that the Desert Wine’s Comfort Theatre also supported those amongst us with special needs and they were instrumental in guiding the audience to where the seats were on the teeny bit of land that once held the railway. 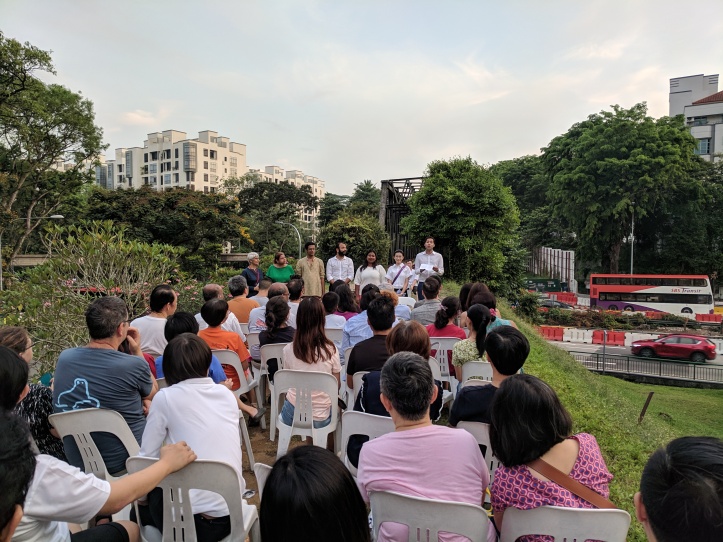 This site uses Akismet to reduce spam. Learn how your comment data is processed.

archives by the month