I was very surprised to see two items that appeared right next to each other in the Straits Times on Monday, March 4, 2013. One was the story headlined “S’pore hosts Asia-Pacific free-trade talks” and the other an advertisement put out by an organization that I did not know existed called “Southeast Asia Tobacco Control Alliance”. 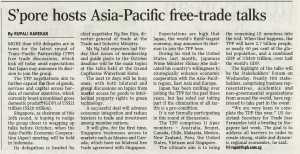 I applaud the SEATCA advertisement but I am sure that there are other even more pressing issues that the TPP will be working on that will have significant implications for all of us in the computing, media and related industries.

The article’s headline is misleading to suggest that it is a “free-trade” talks. It is more of how much can Big Business restrict people with extended copyright, patent and other money grabbing tricks.

This site uses Akismet to reduce spam. Learn how your comment data is processed.

archives by the month